Just before lunch time on the Friday before the Thanksgiving Weekend I noticed that the aforementioned bushings are gone. One bushing was even so much damaged that it split on a short ride to the local supermarket. Therefore it was impossible to continue my travels and I got stranded in San Ignacio in Baja California Sur, Mexico. 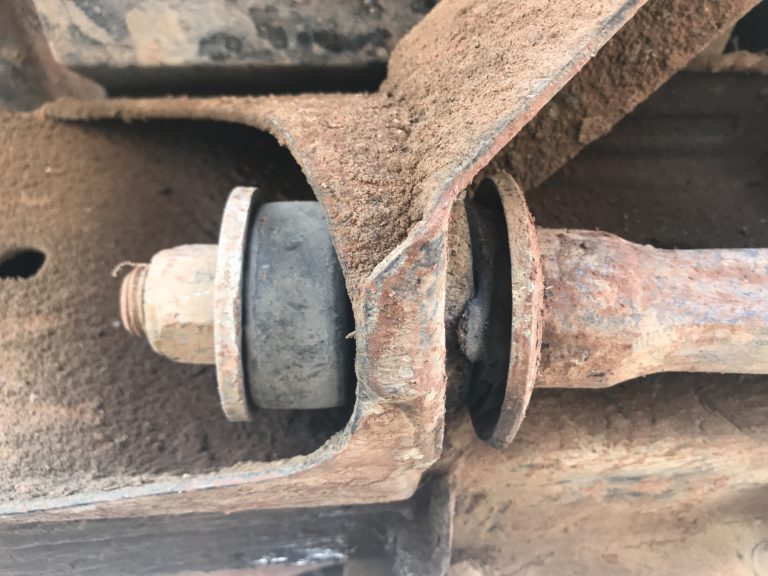 Hence it was Friday around lunch time and due to the time difference time was pressing to get the spare parts order out to Rovers North in Vermont, USA. I could not reach my trusted sales manager at Rovers North by phone and therefore sent a mail with an order of parts which I believed are necessary to get the repairs done. Arthur at Rovers North acted quickly, reviewed my shopping list added a few parts which I missed out and got a package ready for shipment to my cousin Hans in Carlsbad, California, USA.

Not knowing how I could get the parts form Carlsbad to Mexico I thought it is essential to get the parts as close as possible to the border in the first place. Rovers North delivery was scheduled for Tuesday.

While I was sitting in a restaurant later the day I bumped into fellow travelers on their bicycles which I met just two days before. While having a couple cervezas I mentioned my dilemma of a broken down vehicle and not knowing yet how to bring the parts across the border. Well, this nice couple from New Zealand stayed in the hotel Ignacio Springs which is run by Paul and Bonnie a Canadian couple. So the Kiwis asked Paul and Bonnie if there is a method to bring a package from Carlsbad to San Ignacio. There is a solution and Paul asked the Kiwis that I should swing-by.

Just before the Kiwis continued their journey they showed-up at my campground to pass on the message and 15 min later I visited Paul and Bonnie at the Ignacio Springs hotel. The solution was quite simple. They are using a Mexican lady which lives in San Diego, California. As a service she brings packages across the border in Tijuana and puts it on a regular passenger bus. If all goes well, the package arrives 16h later in San Ignacio and by the way you even get a tracking number from the bus company.

Well that sounded easy. What I had not factored in was that we had the Thanksgiving week where all Americans have their family come together. In my case my cousin Hans was supposed to leave Carlsbad on Tuesday to see his family returning only by end of the week. To cut things short, after a couple of phone calls we managed that the Mexican courier could pick-up the package on Wednesday morning to get it shipped by bus from Tijuana which was scheduled for lunch time. All good, however as a central European citizen I might have a different understand what it means “in the morning”. The courier did not show up in the morning but later in the afternoon. As a consequence she got stuck at the border due to the long Thanksgiving queue at the border and therefore missed the last bus at 20:00.

There was no package arriving of me on Thursday and people just said it will come on Friday morning. But even on Friday morning there was no package with by now desperately awaited spare parts. The tracking of my package showed that the bus including package passed San Ignacio and that the package was unloaded in Conception which is about 5 hours one way south of San Ignacio. After countless phone calls which were conducted by Mario from Ignacio Springs someone in somewhere “confirmed” that the package will arrive on Saturday morning.

Guess what, finally at 09:00 on Saturday a package was waiting for me in Ignacio Springs. Mario gave Mechanico Leon a phone call that I am on my way to see him to get the bushings changed. When I showed up in Leon’s garage he still had breakfast. After breakfast he completed some work and I was asked to drive my vehicle into his garage around 11:00.

His son changed quickly all bushings and since it was still early afternoon I asked if he could change my front disc brakes as well. I was carrying the parts since the US since I knew that the discs had already some wear. This additional job was quickly agreed and Leon personally got on the job. 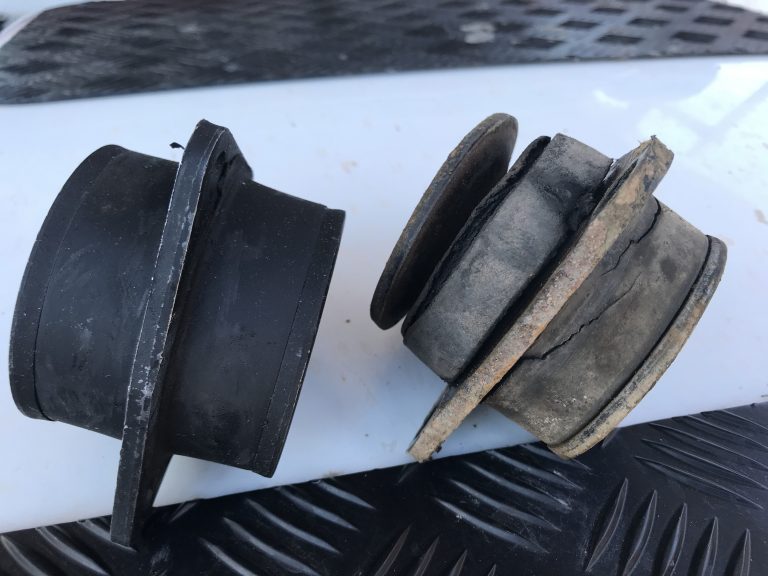 Changing the front left disc was quickly done. After a short break it was up to the front right side. Well, it could have been a glorious maintenance day. But the day was spoiled by the hub locking nut. After braking the lock of the nut it broke easily but the more we opened the nut the harder it was to turn it. Since I had no spare locking nut and we were afraid to damage the hub assembly we agreed not to change the right disc and leave everything as it is. Otherwise I had risked not been able to drive anymore and get stranded as long new parts would arrive in Mexico.

At night I searched whether the parts are available at Rover’s North. Unfortunately for all the parts necessary there was a lead time of 10 to 14 days plus shipping. Now I am puzzled how to get the parts from the UK to Mexico in a reasonable time.